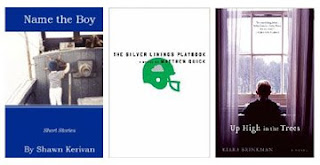 Buy these three great works of fiction from my talented fellow graduates of the Creative Writing Program at Goddard College, Vermont. You'll be glad you did.

Name the Boy (Dan River Press, 2007) is a collection of stories about fathers and sons written in the vein of Hemingway if he had been raised on a lobster boat in New England. The author is Shawn Kerivan, the enigmatic college professor and Stowe innkeeper. If you enjoy Shawn's book, you may thank him by forwarding a bottle of Irish whiskey direct to the Auberge de Stowe, c/o the author.

Matthew Quick's debut novel, The Silver Linings Playbook (Farrar, Straus and Giroux, 2008), is a brilliantly paced and deftly gentle black comedy about Pat Peoples' struggle to avoid facing the dark, terrifying repressed memories of a terrible event that sent him spiraling into madness. Matt''s book is currently under option with The Weinstein Company and has been adapted for a feature film by writer/director David O. Russell (Three Kings, I Heart Huckabees) and will star Anne Hathaway. Also, check out Matt's terrific follow-up book for young adult readers, Sorta Like a Rock Star. And then check out his wife, Alicia Bessette's, debut novel, Simply from Scratch. They are a dynamic writing duo, indeed.

And Kiara Brinkman's debut novel, Up High In the Trees (Grove Press, 2008), is a beautifully written, first-person story told by a boy with Asperger's Syndrome.