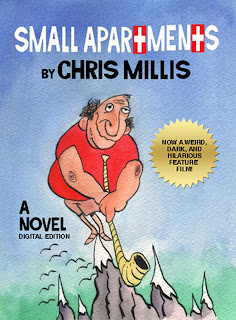 Own the prize-winning, dark comic novel that started it all! Small Apartments -- the hit film that thrilled audiences at the 2012 South By Southwest Film Festival starring Billy Crystal, Johnny Knoxville, Matt Lucas, Juno Temple, Dolph Lundgren and many more. The story that continues to baffle critics, prompting The Hollywood Reporter to call it "singularly weird."