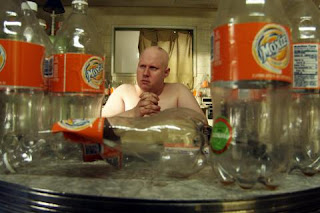 Synopsis: An overweight man, Franklin Franklin, lives in an apartment complex and dreams of Switzerland, but finds his neighbors leaking into his life.

What You Need To Know: On the "randomly assembled cast" meter, only one film in 2012 is able to compete with "Battleship" -- "Small Apartments." The latest film from music video veteran Jonas Akerlund, it features among its ensemble James Caan, Billy Crystal, Johnny Knoxville, Rosie Perez and Dolph Lundgren. Based on Canadian (huh? Canadian?) writer Chris Millis' award-winning novel, British comedian Matt Lucas ("Bridesmaids," "Alice in Wonderland") toplines this quirky dark comedy, compared by some to "A Confederacy of Dunces," with Juno Temple, Amanda Plummer, Saffron Burrows, DJ Qualls, Rebel Wilson, Peter Stormare and David Koechner also along for the ride. Akerlund's hyperactive style did no favors to his near-unwatchable "Spun" or "Horsemen," but this seems like enough of an oddity that we're intrigued to see more. Also intriguing to note, ex-Roxette frontman Per Gessle is scoring the film (actually, Roxette is still touring and selling out stadiums).

When? Slated for Sundance, but absent from the line-up, we're sure it'll do the festival route later in the year. (“Small Apartments” will premiere in March 2012 at the South by Southwest Film Festival in Austin). Read full article here.