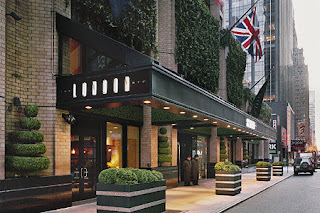 The below item ran in Liz Smith's Feb. 7 column. The column is featured on wowowow.com and syndicated in newspapers throughout the country.

SPOTTED AT NYC’s The London hotel: comics Tom Green, Rob Schneider (and Rob’s wife Patricia), and screenwriter Chris Millis. Rob was making the talk show rounds, pumping up his new CBS sitcom, “Rob,” which is doing very well after only four episodes. (These days, if a sitcom doesn’t explode after one week, it can disappear!)

By the time the Schneiders joined Green and Millis at the hotel, the kitchen had closed. But never underestimate the power of celebrity “handlers.” After some smooth talking, the staff at The London managed to keep the guys and the rest of the party in a good mood, well nourished and with no lack of libation. Nothing like a hit TV series to get a stove working again.

The full column can be seen here: