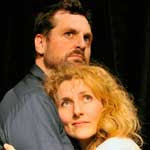 Scott Sheldon, who plays the hilarious Officer Smith in the upcoming feature, "Small Apartments," which will debut March 10 at the South by Southwest Film Festival, has been named by "Stage and Cinema" as one of the best stage performances of 2011 for his role as Moony in the Tennessee Williams play, "Moony's Kid Don't Cry," staged by The New American Theatre in Los Angeles.
In "Stage and Cinema," Harvey Perr writes, "(Tennessee) Williams, of course, loved actors, and wrote some of the greatest parts in the history of the American theater; actors have so much fun playing them, and that particular joy was expressed in Five Beauties. But of the five one-acts, it was in Williams’ early and uncharacteristic “Moony’s Kid Don’t Cry” (one of the five) that Scott Sheldon exploded into one’s consciousness by transforming himself into the hapless Moony."
And in an earlier review, The Los Angeles Times hailed Sheldon's performance as, "bravura."
Read the the "Stage and Cinema article here, and the Los Angeles Times article here. Link to the play here. Unfortunately, the play has closed its run. So, look for Sheldon when "Small Apartments" hits theaters.